programming puzzles puzzles for programmers puzzles to solve August 27, 2019
hey5
When it comes to sharpening programming skills, puzzles are fun indeed. Puzzles not only help you to learn a new language in a better way but also make you crave for more difficult problems, Bon Appetit! Go ahead and challenge yourself with these awesome hand-picked puzzles for programmers that will put your brains to test and boost your learning process. 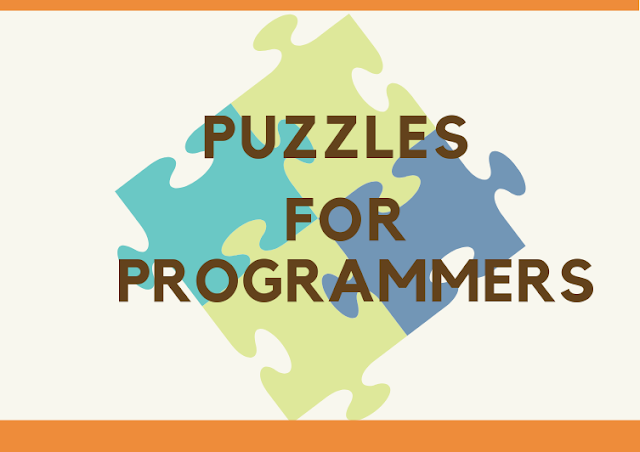 Some Popular Puzzles for programmers

The classic puzzle – the tower of Hanoi is a very famous method to study recursion. The puzzle has three major rules.


Well, you can solve the puzzle in 7 simple steps {as 2n-1 steps where n= number of disks}.
The algorithm for the puzzle is as follows:-


The Best Sub-Array Puzzle is may seem ignorable at first sight but it is tougher than it looks. The puzzle is all about finding the sub-array which sums up to be the largest value.

Note:- make sure that your array contains negative element because if it contains every element as zero or positive, the sum of all slots will be the best sub-array.

After reaching the endpoint, discard the first element and perform the process with the other adjacent elements until you reach the endpoint. You will find a subarray to be the best subarray. In this case, there are two slots: [4,5] and [1,2] with the sum as “2”.

Here is the code for the process:-


Four travelers have to cross a shaky bridge at night. The bridge can only bear the weight of two persons at a given time and a flashlight is needed to cross the bridge. There is only one flashlight available among the group.

Now, no traveler walks with the same speed: it takes 1 minute for the first traveler to cross the bridge, whereas it takes 2, 5 and 10 minutes for the second, third and fourth traveler to perform the same task. Moreover, while crossing the bridge in a set of two, the faster traveler has to match the pace of the slower ones. Hence, how much time (least amount) will it take for all travelers to cross the bridge?

It will take 17 minutes for travelers to perform the task. How? Let’s find out.

Puzzle 5: The Lake, the Goblin and You


You are in the center of a circular lake and a goblin is waiting on the shore to kill you. The goblin never eats, sleeps and cannot swim but has got great eyesight. He is logical and will do anything which is possible to get you.

Now, you can outrun the goblin on land but he can run four times faster than your boat. How will you escape him?

Paddle r/4 – e away from the center of the lake. Maintain the distance and now, paddle around center of the lake as long as you reach the side opposite to goblin. Hence, the goblin would have to run faster than his maximum speed which is not possible. Now, paddle in a straight path against the location of goblin towards the nearest shore. Paddle up to the distance of   ¾ * r + e whereas goblin has to run more than four times faster which is pi * 4.


A person shoots his wife. Then she holds her underwater for 5 minutes. Finally, he hangs her. But after 10 minutes they both go out together and enjoy a wonderful dinner together. How can this be?
The person is a photographer. He takes his wife’s picture (shot her), held her picture in water for 5 minutes (held her in the water) and hanged it to dry (hanged her). After 10 minutes, he went out with her for dinner.


A circular birthday cake has to be divided into 8 equal pieces within 3 cuts. How can you do it?
Cut the cake in the horizontal and vertical direction. Now as your cake is cut into four equal pieces, arrange these pieces in a stack. Afterward, cut the stack in half. Thus, you will have 8 equal pieces.

Puzzle 8: Where Did The Logic Go?


Here’s a code in PHP which asks input from the user and checks whether it is in range or not.

then the logical expression:
$inrange = $a and $b;

Hence, it can be written as:-

Now, when you compile the program with the same inputs, it shows $inrange=true whereas it should have shown the expression as false.. How did it happen?


Here is a code in PHP which says:-

The ideal result should have found the target and considered the value as true. But, the result is shown as “not found”. Why?

Do you remember that all values convert to true except for:-

Hence, in this case, as our target is ‘a’ in the above code,  the value will get converted in False and strpos will be zero and the message will be ‘not found’.

The solution to this problem is:-

Elongate this list by sharing your favorite puzzles or share your experience while solving these puzzles here in the comments. Always remain adventurous.

9 Awesome Puzzles to Churn your Programming Brain Ananya 2019-08-27T18:39:00+05:30 5.0 stars based on 35 reviews When it comes to sharpening programming skills, puzzles are fun indeed. Puzzles not only help you to learn a new language in a better way b...